Finally getting around to posting some pictures of the project
I removed the three front tank seats, installed a doubled up marine plywood floor, threw together a wooden console to mount the steering console on. I then put two coats of Durabak on the floor in OD green. Installed a 50 hp Johnson on the new transom, installed a new push/pull steering cable in place of the cable and pulley system. Put in a set of controls and a nice captain's chair. Made a hinged plywood cover to go over the area from the transom to the first tank seat. Installed a 12 gallon gas tank. Mounted two folding seats on the remaining tank seat. Made a plywwood gun box and mounted it to the gunwale on the port side.
New bow eye, new stern eyes. New navigation lights mounted. Remote control spot light mounted. GPS/Fishfinder mounted. Sliding mount for transducer mounted.
made up some rectangular frames out of Schedule 80 1" PVC, installed some old pieces of fast grass, mounted to one side of blind top with loose zip ties. Flip up top!
Took a little longer than I expected, ended up having surgery on the busted wrist and lost a few weeks . All in all I am very happy with the finished project. Come spring I will remove the blind, mount the electric down riggers and rod holders and start fishing for trout and salmon

Well looks like this Mirrocraft section has been quiet for a long time. Anyone around? I just finished a deal to bring home a New last years model Mirrocraft 1766 Dual Impact. going from a 40 year old center console to a brand new fish and ski ! I won't take possession of the boat until Spring due to it being 12 hours away and well the current state of things. I will post some pictures or maybe even a video once it's home and ready to go. Does anyone have experience with the late model 1766? It has been changed for 2021, it's now a F176 so I was able to get a great deal on last years model.

No bells and whistles, vinyl flooring for easy cleaning, added a swim platform for the wife and kids, and paired it with a Suzuki DF90A.

Well that's it for now, Can't wait to get back on the water. Until next time be safe everyone.
P

This is my Dad's Mirro Cruiser 216 originally with a Ford 302 2v and a mercruiser 888. He bought it in 1996 and took it to the ocean and a few local lakes in California. It sat in my backyard for 16 years before i got interested in fixing it up and taking it back on the water. The engine rusted out so I swapped in a Ford 302 4V with a closed cooling system. Gel coat. Has been touched up, lots of broken parts replaced, and a new instrument panel with fuel flow. She should be ready to go by 31may2021 for Lake Mead. 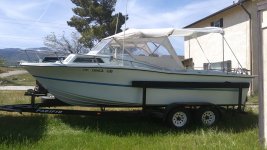 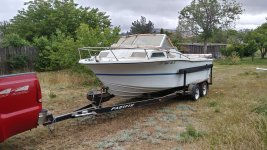 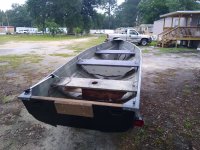 Bought this and it's registered as a 1986 MirroCraft but I found a number stamped into the metal on the port side of the hull. That prompted me to email someone at MirroCraft and she sent me a catalog from 1965. After looking at the pictures, I've determined that I have a 1965 Topper 12. Can anyone confirm this? I'll post a picture of the number.
D

dschuman said:
View attachment 342444Bought this and it's registered as a 1986 MirroCraft but I found a number stamped into the metal on the port side of the hull. That prompted me to email someone at MirroCraft and she sent me a catalog from 1965. After looking at the pictures, I've determined that I have a 1965 Topper 12. Can anyone confirm this? I'll post a picture of the number.
Click to expand...