Hiya fellas! Well, it's been a quite a while since I've stopped by the iboats interweb. I've been way busy these days. So, what have I been up too?

Well, I have bought and sold a few boats over the past few months, the important ones remain here on the property. I even threw away a couple of nasty glassers. I have been wrenching on my ol Honda moto, hopefully that will be ready to ride this summer. I've done a little work on the Islander but that is going to need to pick up in a big way here shortly - more on that later.

The vast majority of my time, effort, energy and finances has been spent scoring this beauty.... 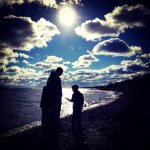 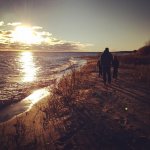 That would be a chunk of beach on one of the largest freshwater lakes in the world and we could not be more excited!!! It's a 115 feet of Lake Huron waterfront and 500 feet of northern Michigan wood. It's in between Cheboygan and Rogers City and we absolutely love it! The water is crystal clear, the sand is amazing, and the sunrise is spectacular. In this area there really aren't very many cottages so there's lots of elbow room, NO boat traffic (except for the gigantic freighters), and hardly any road traffic.

We have been looking for just the right place for many years now, it's been a pie in the sky dream for a long time really. Then we started getting really serious late last summer. Scoring this piece of property has been an epic journey, lots of ups and downs, agreed contracts, failed contracts, major governmental challenges, on and on... But, in the end, I got it, just finalized the last of the documents a couple of days ago. And, at bottom feeder pricing too!!!! (Those of you who know me best would expect nothing less) Yah baby!!

Congrats, welcome back, been some changes around this joint.........

Give the SC section a read. Lots of Chieftains in the mix this year, and the 2 SOTY projects you missed are both great!

Interested to hear whats up w/ the project rigs and see the Islander's splash. Been a journey, I'm sure you're all ready for it's conclusion.

Starmada Splash of the Year 2015

Wow congratulations! Lake Huron sure had some beautiful clear blue water when I lived in Sarnia and played in that lake often! Enjoy it!

Starmada Splash of the Year 2014

Awesome score on the lake front ground! Those are some great pics of the view.

Not much has changed around here, guys in love with old hunks of tin, frying pans, MBS, donor destruction, local tinners elevated to Mods^ and such. :lol:

Well Golly, Look who's back. Good to see you, Jason!

Beautiful looking hunk of beach. No wonder the Mob search parties couldn't find you - We didn't look in Paradise.

Ya, welcome back jason. I've missed those 4:00 am progress updates. Lake Huron is a jewel no matter which side you look at it from. - Grandad

Congrats man! Looking forward to seeing one or more boats on that piece of land there!!! Enjoy!

Thats pretty awesome! I got here during your break from updates on your projects. Hope to see them get started again when the time comes. Im gonna have to go back through them again now.

Look what the cat dragged in, Great to see you back Jason. Congrats on the very nice piece of real estate. Hope to see you around a bunch more, our Dollar is climbing back up slowly so GAB will need some help keeping us Kanucks at Bay

Congrats! Beautiful piece of property. Should have plenty of room to dock a nice fleet.

feels like that episode of happy days when the fonz came back .

Now, punch the juke box, fire up some tunes and tell us what's going on with the islander.

:welcome: back.. Great to see the world didn't swallow you up..eace:
The pics or awesome to say the least..
As it has been said many times here Congrats on the property..
Hope you can find more time to spend on i-boats..

Using the popup of something a little more like home on the property?

Excellent news Jas!!!! Congratulations on such an ambitious acquisition! Great to see you back buddy! :thumb:

Wow what a beautiful shoreline and awesome sunset! Great to see you back. Looking forward to updates on all the projects, and more pics of your new place.

Congratulations Jason, very nice, and nice to see ya back.