In the attached photo of the thermostat housing of the Volvo Penta MD7A, the hole at the right receives a 1/2" pipe that runs from the impeller pump housing at the back of the motor. The bushing in the photo goes in the hole. The other photo shows the end of the pipe. There's a bead near the end of the pipe, but nothing at the connection to put a wrench on, so how is this connection made secure and watertight? It wasn't leaking when I (carefully and slowly) worked the housing off the motor, but that joint leaked when I reinstalled the housing. I'm working on getting a new bushing, but that won't be the answer if I can't make the friction-fit connection right. How does a joint of this type work?
Dan 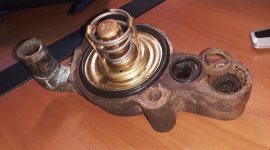 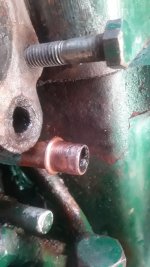 The bushing is a seal and is designed to be tightened securely by just the thermostat housing being torqued to spec. The copper pipe is soft and would not be able to take very much tension.

If it does leak it would most likely come from the rusting of the housing. Try to sand the area smooth and use sealant between housing and bushing. What does the manual call for?
D

Thanks alldodge. I have three versions of the manual, all of which are for both the MD6A and MD7A. I haven't found a manual for just the MD7A. The two motors have different thermostat housings (the MD6A housing doesn't have the integral port for the pipe), and all three manuals describe and show servicing the thermostat for the MD6A only.

If the pipe was firmly and rigidly attached to the motor, I can see a tight seal being made as the housing is bolted in place - the pipe end compresses against the bushing, and the bushing compresses against the shoulder in the cup in the housing. But the pipe runs about a foot to the back of the motor, turns down 90 degrees, and connects to the top of the impeller pump housing. There's a tiny bit of play along the direction of the length of the pipe, and I wonder if that makes it tough to get enough pressure to make a seal with the joint being a simple butt joint.

I think the shoulder in the cup in the housing can be cleaned up pretty well - I don't see corrosion, just rust and a little crud. I'll get it as clean as I can, get a new bushing, and try the connection again.

dbdoug said:
If the pipe was firmly and rigidly attached to the motor, I can see a tight seal being made as the housing is bolted in place -
Click to expand...

ok, not tight, then I do understand your concern
No first hand knowledge, but there are higher pressure fuel lines that just use a O ring and a pin to keep in in. With just a little play and not being able to move it back far enough for it to disconnect, will figure its was designed that way