I bought a pair of 1997 seadoo GTI's a few weeks ago and it looks like I didn't get the full story, go figure. Previous owner told me all they needed was carbon seals on each and a start switch on one. They both had new wear rings and other assorted new parts. I got new carbon seals put on and rigged up a start switch on the one, got them both running in the shop at home. Took them out last weekend and one ran pretty well but the other just wouldn't get up on plane, wouldn't go more than 15mph. We were out for a few hours and then the one running well started acting up, but too sporadically to get a good feel for what it was doing. Then a storm rolled in and we left. Fast forward to this week and I put a new wear ring in the one that wouldn't go the first weekend then for shits and giggles I pulled the pump on the one that was running ok and found out there was ZERO oil in the pump cone. All the bearings are shot and the inside of the cone is melted. I figured I had at least one good pump so I threw it on the one that wasn't going last weekend and went to the lake.

When I got to the lake I couldn't get that ski to fire off before I launched so I swapped the pump over to the other one that was working the first weekend. It fired up and I dropped it in the lake. Got out on the water and it was going great, for about 10 minutes. Then it just shut off like I had pulled the key. Hit the start button and it fired right up but now it had a bad engine bog. No acceleration or anything. Then it dies again. Got it going sporadically and sometimes it would get up and hit 30mph but then it would shut off again. Decided to pull off the lake and head home.

After doing some research and then looking at the skis, I've found some issues visually. First, the gray fuel lines are still there, kind of. It looks like the vent lines are still gray but the lines going to the fuel selector and back to the engine are clear. Second, it looks like the oil injection lines on the carb have been capped off. Previous owner didn't say oil injection had been deleted and to run pre-mix so I haven't been. I don't know how much he ran them but I know I've only got a few hours run time on one, how worried should I be about cylinder damage? Could the engines have gotten overheated due to lack of oil? Thanks y'all.

Its probably already in bad shape, and not so much cylinders (damage there as well) but the bearings like the first one
P

alldodge said:
Its probably already in bad shape, and not so much cylinders (damage there as well) but the bearings like the first one
Click to expand...

Are you referring to bearing in the pump?

If I read your problem correctly, is the oil injection was deleted and its been running without premix. If so then the motor is where the problem will be
P

alldodge said:
If I read your problem correctly, is the oil injection was deleted and its been running without premix. If so then the motor is where the problem will be
Click to expand...

From what I found last night, yes, the oil injection lines have been removed at the carb and I personally was not running premix since I didn't know.

This being the case, am I looking at engine bottom end damage?

That would be my guess. Running a motor with out oil
P

I pulled the cylinders off tonight. I was kind of hoping to find some ring damage or something obvious to allude to the low compression. Nothing is jumping out at me that screams low compression. The piston skirts had some slight piston slap markings but nothing crazy and the cylinders don't look bad either. The only thing I saw that was noteworthy was the "headgasket" o-ring. They were rather smashed and hard looking.

It seemed like the head bolts had not been taken off before since they still had the white paint on them. Perhaps the low compression is just due to age rather than catastrophic failure?

Another thing I saw was that there is still a large hose hooked up to the engine below the carb from the oil reservoir and a smaller hose is capped off. I looked in the manual for the larger hose but it just says it goes to the crankcase. I didn't see any oil in the crankshaft area though. In the picture of the oil system the hose I'm referring to is on the far left. 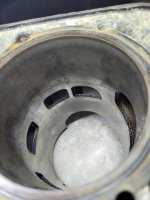 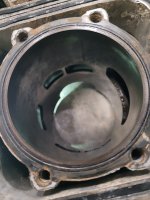 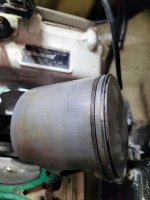 Not sure about the hose, but how do the crankshaft bearings feel and look?
Q