Ive had it out twice. First time, the belt was misaligned, squealed like crazy, then broke, temp gauge was going through the roofat around 240. I immediately killed the engine, took it back to the dock with the trolling motor.
Second time out, started getting hot, and I saw water pouring out of a freeze plug that was just laying on the engine mount. Got that replaced (quite a PITA), bought a large tub to run it in the driveway. Running it in the driveway, there’s no more water pouring out of the block, but the temp gauge at idle, sits at around 160, then rockets up to 240ish. Ohmmeter on the sending unit says it’s good, grounding the sending unit pegs the gauge full hot. I’m thinking possibly of a new gauge and sending unit, and getting clear hoses to see water flow. Any suggestions? Previous owner , of course, said everything ran great last year. Pretty sure this boat has only been in freshwater.

No such thing as a freeze plug. They are core plugs to cover the hole the core sand was removed during the cadting process.

They wont protect your block from freezing

Bach to the temp. Did you put a new raw water pump in the drive yet. If not, start with that

You cant run the drive from a large tub, that will smoke the impeller. Raw water pumps are not self priming. You need the whole drive submerged to prime the pump (as in the boat should be in the water)

Either use muffs or the stringer flush cap
K

Start with the clear hose idea, the only problem about running in a tub is picking up bubbles. You want clear going in and also going out to the manifolds which will indicate a head gasket leak.
You should at least try another water test.
F

Add to your to do list...
Remove and test/swap thermostat

Where do you live ? Does it freeze . Those core plugs don't just fall out on their own.

Also post some pics of the outdrive. For any new to you boat , I would pull the drive . Not only to change the impeller but to also look at the splines and grease everything up.
E

Thanks for the replies, this boat noob appreciates it. I just used the term freeze plug because it is universally understood what I am talking about. I have not replaced the impeller, which I think is the same as the raw water pump from what I’ve read in the Seloc manual I bought. It also says in the manual “the impeller pump in the vertical drive is keyed to the vertical driveshaft and is a self-priming pump.” I’m not trying to be argumentative, just trying to fully understand the system and it’s all new to me. And if I had water pouring out of the core/freeze plug hole, does this not mean I have water circulating?
I cant use muffs, because the water intake is located on the underside of the drive right next to the prop, and I don’t have the stringer flush cap. Everything I’ve seen/read/heard has said that as long as the intake is fully submerged, it’s good to go and will not harm the impeller. Is that wrong? Again, not trying to argue, just learning.
Im really curious as to why boat idles fine and stays in the 160-170 range then the temp rockets up to 240ish. I guess the simplest thing to explain that is a stuck thermostat, right?
I need to order a new thermostat and impeller, any recommdations for where to buy parts for this old boat?
E

Sorry, should have put in here that I live in Colorado, and it does freeze here. Just had snow in the high elevations last week. Hope it keeps coming, the Colorado River and entire southwest needs moisture very badly.

based on your statement about the muffs , it sounds like you have an electric shift NOT an 800. Those electrics shifts went up to 1977 then in 78 they switched over to the 800s .

I used to have an electric shift , there are a couple of ways that you can run them on land .

1. buy the OMC flushing kit , which basically replaces one of your trunnion caps 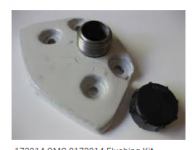 2. You can buy a 5 dollar prestone flushing thing at any auto parts store , you add this into the line that comes from your intermediate and into your thermostat housing. 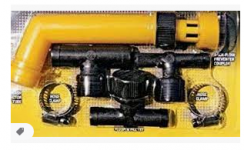 below is a pic of mine , you can barely see it on the hose going up to the thermostat. Hook your garden hose here and you are good to go . 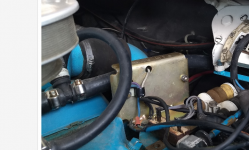 as far as parts go , bookmark this link . it has all of the parts diagrams. get the part numbers you need.

its self priming when its submerged. to submerge the pump, the whole drive needs to be in a bucket. since the bucket would need to be as big as the boat to do that, its not practical

use muffs or the trunion cap with the hose fitting.

if you havent done the ball gears or the impeller yet, that should be first thing you do with a stringer as soon as you buy it.
E

I guess my research on what I had was wrong, or I misunderstood. Yes, it is an electric shift. I’ll have to get some parts on order quickly. This will be shelved for a little while, we have visitors coming. I appreciate all your help. I will do my best to report back.
E

I bought some parts to hopefully fix the problem. Got an upper seal kit, a lower seal kit, a water pump rebuild kit, new thermostat, new temp sender, and probably a few others. Added some pics, I think (hope) I found my biggest problem. The impeller and impeller housing were broken. I also had oil leaking from water intake, and led me to believe oil was leaking from upper, so I changed the two stacked seals on driveshaft. Changed the thermostat out as well, it was corroded into fully open position. Mistake on my part was not having a setup to pressure test, but I put it all back together and reinstalled. Can hopefully get on the water next week. 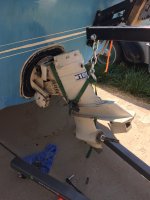 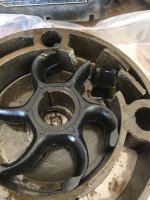 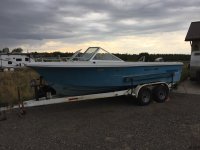 Good job on the resealing.

I have read that the housing will break like that if the drive is stored in the "up" position over the winter. Water collects there and doesn't have a place to drain . So make sure the bow is up and drive down for winter storage.
E

Continuing saga, haha.
Put the boat in the water, stayed right at the dock. Started engine and now I’m leaking water from the engine mounted water circulating pump, right out of the weep hole on the bottom. I guess that’s progress, there was never any water leaking from there before. So I guess the impeller is moving water like it’s supposed to. New water pump ordered, should be here in a few days.
I didn’t run it very long, just long enough to see where water was coming from. Maybe I should have kept going until it reached temp, but it’s not right, so I didn’t want to do any more damage. I strongly suspect that the previous owner did zero winterizing and that’s the cause of these woes. I have seen no evidence of cracking elsewhere, but who knows. The engine absolutely purrs when started.

earl84 said:
I strongly suspect that the previous owner did zero winterizing and that’s the cause of these woes. I have seen no evidence of cracking elsewhere, but who knows. The engine absolutely purrs when started.
Click to expand...

Thats my fear when watching your thread , you have signs of no winterization and hopefully you dont have a cracked block but I dont think it would be a shocker at this point.

Do you have rust trails from anywhere on the exhaust manifolds or engine block ? has your oil level remained the same ?

I am in Utah and every spring / summer our classifieds are loaded with boats for sale with cracked blocks. Unfortunately some peeps just done make winterization a priority.
E

I don’t see any evidence of those things. I changed oil when I bought it and checked once since, didn’t note any loss of oil and certainly none dripping anywhere. Hoping for the best. Like I said, engine purrs like a kitten.
Incidentally, I did put in the T from the Preston flush kit. I can’t seem to find the correct trunnions cap flush kit anywhere.
E

Doudlechecked oil level, doesn’t appear I’ve lost any, and none leaking anywhere.
New nagging smallish problem. Came home today and gas was coming out of fuel vent. Could be from overfilling, I suppose. But I don’t really know my fuel tank capacity and it didn’t seem like I was overfilling, but I don’t have a great way of telling since fuel gauge is inop. Aargh. When I cracked the fuel cap, there was a large rush of air. Why didn’t the vent, vent? Instead of overflowing out of the vent. Is there a check valve or something that might need attention? I guess I’ll just keep an eye on it.
Maybe I should start another thread for this.