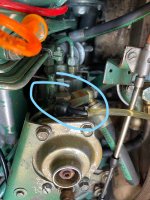 Hi. I got this problem with my Volvo... First of all I'm not even sure if this is called an injection pump in english. Anyway, the pump that turbocharger gives pressure and so it feeds more fuel to the engine.

But. I was driving, then losing power, I checked to the engine room and noticed a fuel leak. This rubberthing in the middle wasn't placed properly and I took it out. And here's what I think is strange: Fuel came out of there as flowing, not drop by dop as I thought it was supposed to be. Then again this drop by drop is only my opinion, I don't know the thruth.
I put the rubberthing carefully back in it's place and managed to get (almost) full power again.

The questions are: 1) What is the function of the rubberthing? It has a hose connected, the hose leads down to a plastic bottle. Like an overflow system of some kind.
2) What can I do to avoid any leaks in the future?

That's the diaphragm rupture indicator and should never have any fuel in it. When the pump diaphragm gets a crack in it, the line sends the excess fuel into the intake instead of into the bilge. Need to replace the pump
R

Awwww... Really? Can I get spare parts from anywhere, or do I have to replace the whole pump?

My guess is your going to need to have the pump rebuilt or replaced. In the USA I would take it to a local diesel injection pump service and have them do it. You can go to
www.volvopenta.com

Ok, that's some good news... Not.
But hey, thanks for help! I knew I could get help from here!
R

Hi. Still wanted to get back to this issue... I noticed one bolt of the pump cover wasn't properly tightened. I fixed that, now I don't have problems when going out. No leak, no nothing. There's a little diesel in the overflow bottle, not even close to what it was before.

But. When I'm out on the sea, and drop the speed for whatever reason, it's awfully hard to get the boat back to plan. The engine is picking power very slowly, feels like the turbocharger is out of order but it was changed a few months ago, so probably that's not the reason. Eventually I do get the full power, it just takes time and feels like it's never gonna happen.

It's just strange, why do I have a perfect engine in the beginning (not cold, but warm enough) and then it acts like that... No power.

I have also thought of rotating the ring inside in order to achieve boost a bit more sooner, I just don't know if that's a bright idea or not...

But as I said: The turbocharger is new. The fuel injectors have been checked, they're ok. New filters, fuel is fine, tank is clean.

rantpe said:
Hi. Still wanted to get back to this issue... I noticed one bolt of the pump cover wasn't properly tightened. I fixed that, now I don't have problems when going out. No leak, no nothing. There's a little diesel in the overflow bottle, not even close to what it was before.
Click to expand...

Unless your seeing Black smoke rolling, I would still think its the injection pump.

The pump still leaks fuel, so my guess without measuring pressure is your not getting the same amount as it should have.

When motor and pump is cold things shrink up and fit tighter. As motor heats up things expand and things leak more. If it was mine I would have the pump rebuilt
R