Need some ideas of something to coat my trailer with, im going on my third one in 5 years. I do fish a lot and launch my boat in the brine about 40 times a year. I was thinking maybe an under coater . anyone have any ideas\ suggestions?
R

Have the three been new or used?

Have they been C-channel or closed tube frames?
R

Some trailers do not even have drain holes in drop down cross members.----Any accurate descriptions of failures ?----Any pictures of your issues ?

Different styles of used trailers, latest one is a Frankenstein but in good condition, which is why I want to make it last, dont have any pics from old trailers, once they're unusable I strip anything thats good on them and sawsall the rest

I would say closed tube

What brand?
What are you doing or not doing to it?
A good quality hot dip trailer should last a good long time

I’ve replaced the rear axle and the rear cross member on mine in 15 years of ownership.

Going with aluminum in the next couple of years if I decide to keep it
Last edited: Nov 21, 2021

Woodstock60 said:
I would say closed tube
Click to expand...

There's your problem. I would avoid that type, near impossible to rinse the interior.
E

You can drill a couple of drain holes in bottom but it has to be in the correct spot to prevent weaking it structurally.

I took my painted steel trailer to the coast five times over a couple of years. I had but some irrigation holes in it but it already had drain holes. Would flush it with fresh water almost immediately after dunking. Trailer held up in spite of being the worse type for corrosion resistance.
R

Make sure there are drain holes.-----Perhaps a garden hose fitting for filling / flushing the tubes.---Size the drain holes so that tubing fills faster than it drains.-----A few holes for air circulation help to dry inside of tubes.-----Or get a trailer with channels.-----Never done any saltwater launching myself.

I flush out the box section of my galvanized Load Rite every time it goes in the water and it’s held up well. The frame is a 1994 that’s been upgraded few times (longer tongue, longer roller bars, 6,000 lb axle, 5 leaf springs and 12” brakes)….

I would never buy a boxed frame trailer if it was going into salt water...even if it was galvanized since they can't galvanize inside the tubes.

Your going to have corrosion issues in saltwater unless the trailer is hot dip galvanized or aluminum construction.

Ive been fishing in the salt 45 years i know theirs no stopping it, im looking for good ideas to slow it down, and after checking the tubes are open. Theirs no brand name, mostly galvanized with some heavy steel parts. Id like to coat it with something, thought maybe someone had some genius ideas!

If you read through Load Rite's documentation on hot dip galvanizing you can see that it does galvanize the inside of the box section as well and from everywhere I can see the inside of the frame on my old '94 is galvanized, or else I would probably not have had it this long!
But I have seen galvanized trailer frame parts rotted out, mostly cross members probably because they did not have a drain hole drilled at the lowest point, and sometimes on axle assemblies because they were not welded fully so water got inside. I had a 2x2 galvanized axle that I just replaced, it was built by Champion Trailers and installed in 2004, it had hardly any rust anywhere and I was able to sell it for only a little less than I paid 17 years ago! So galvanizing like many things depends on workmanship. I replaced that one with another built by Champion Trailers, 6000 capacity, drop/saddle design.

Woodstock60 said:
Ive been fishing in the salt 45 years i know theirs no stopping it, im looking for good ideas to slow it down, and after checking the tubes are open. Theirs no brand name, mostly galvanized with some heavy steel parts. Id like to coat it with something, thought maybe someone had some genius ideas!
Click to expand...

To have a chance, you have to coat every square inch, inside and out with a protective and or sacrificial coating.

To make matters worst, the coating needs to be rather heavy and uniform. The slightest bare spot or chip in the protective coating will immediately start rusting.

Unless you can submerge the trailer (parts) in the coating of your choice, your most likely fighting a losing battle.

I only do saltwater with my galvanized trailer. Besides rinse, rinse and more freshwater rinse I use this. I touch up every couple of years but better than buying a new trailer. I've learned the hard way you need to wear gloves, long sleeve shirt and googles. You can not remove this stuff from your glasses or clothes and is a ***** to remove from skin, way better than ZRC. 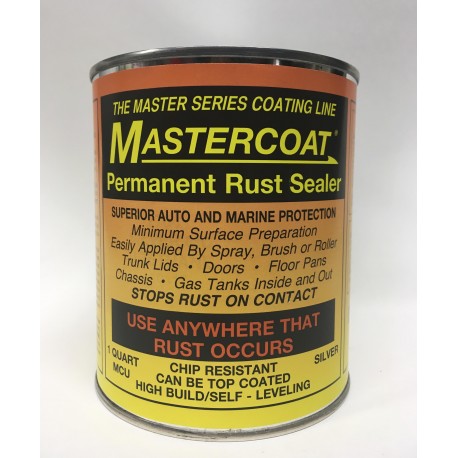 Mastercoat Permanent Rust Sealer is a professional paint over rust application that will stop rust permanently at low prices.


Woodstock60 said:
Ive been fishing in the salt 45 years i know theirs no stopping it, im looking for good ideas to slow it down, and after checking the tubes are open. Theirs no brand name, mostly galvanized with some heavy steel parts. Id like to coat it with something, thought maybe someone had some genius ideas!
Click to expand...

Combining aluminum's natural resistance to corrosion with a protective coating is generally enough to keep your aluminum in great shape.

Brecht145 said:
Combining aluminum's natural resistance to corrosion with a protective coating is generally enough to keep your aluminum in great shape.
Click to expand...