I have a 1963 75 HP Johnson mechanical shift. Right now I have a 10 x 9 1/4 prop for it and I want to prop up to get the RPM's down and get some more speed. I'm finding out that there was a large hub and a small hub prop. Mine has a small hub on it now. I have a couple beat up props that are large hub props but the pitch in only about 10 and besides, I want something in better condition. I'm thinking about 9 X 12. I'm curious what the applications for the small hub would have been. Likewise for the large hub. Why did they make two different styles. Also did they make a separate line of props if you had the electric shift. Thanks.
R

Sorry. I meant to say I'm thinking of a 10 x 12. I remember our Caprice had one from the factory and we stepped down to a 10 x 9 1/4 and it made all the difference in the world for pulling skiers. It did run higher RPM's though. Maybe that's why the cir-clips eventually gave out in the pistons. But before the prop change the boat went a top speed of 40. After the change it went 37 but gained around 500 RPM's up to around 5000. I don't recall what they were supposed to run. OMC knew what they were doing so probably 4500 with the stock prop. But I remember I could darn near stop the boat slalom skiing behind it if I didn't let it get up to speed. We got many years with that (power) prop before the old Caprice gave up the ghost.

Your numbers are normal for the prop change you mentioned. Dropping pitch gives better torque (for getting water toys up and going, pushing heavier boats) but reduces speed and increases RPMs usually. OMC went with 4500-5500 RPMs WOT range for many years with the rated HP at 5000. They had big blocks to get the torque which made for great pushing ability for the engine size and ran at lower rpms turning large diameter/shallow pitched props. Back in the day (1950s era) a 35 hp engine was a very effective power plant for pulling a skier on a pair of skis and would run a 16', wide beam, bay fishing boat loaded down with gear and folks at a good clip. I learned to water ski behind an Evinrude 18 hp on a 14' wooden boat......wasn't stellar performance but it got the job done and was all that I could afford at the time....lucky to have that.

Somewhere around the late '50s they introduced a streamlined lower unit identified by a pointed nose cone on the gearbox vs the old style blunt nose cone. I think the Evinrude "Lark" carried it. I recall it being smaller in diameter and much sleeker. No idea as to the gear ration difference, if any, in the two lower units. Also in the 1958-9 timeline the "Fat 50" OMCs first V4 was produced and it had a larger diameter lower unit turning a 13" prop vs 10" for the lower hp engines of the day. I would imagine that the different hub diameters you mention would have to do with props that fit the different styles.....all vague memory conjecture!
R

I didn't know that about the development of the pointy lower unit. But it makes sense. It seems the 88/90 IO came out around 62 with the OMC tri-hull boats and then they incorporated the design into their outboards. It's funny you talk about skiing behind an 18, Texasmark. I grew up on a lake in Northern Minnesota and all us kids did was waterski. We went behind a 9 1/2 even. the older kids taught the younger kids to ski. My neighbor had a 59 50 HP (I don't know if that also qualifies as a fat 50) on a Speed Queen boat. He pulled four little runts behind that boat. I wonder if a 50 nowadays would do that.

Yes. There is a caveat to that story as we were using the waterskis that my father had custom made for him for getting up behind our 57 35 HP which was mounted on an Alumacraft FD. They were about two inches wider than traditional skis of the day. They provided much more surface area than anything made now. I still have those skis. And the boat. And a 57 35 HP although not the same one.
A 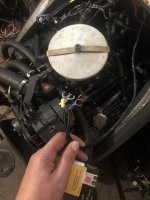 Any idea where to connect this 3 wires ???